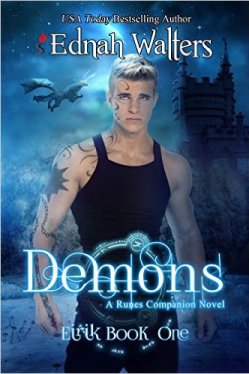 “Ednah just Keeps getting better. Demons is one Hel of a ride!” ~ Karen Lynch, USA Today Bestselling Author of the Relentless series

“A beautiful addition to an already mesmerizing world. Be ready to obsess over a new book boyfriend!” ~ Melissa Haag, International Bestselling Author of Judgement of Six and Beastly

“Echo who?? Erase EVERYTHING you think you know about Eirik, because it’s DEAD wrong. This book is the best of the series, BUY IT, DEVOUR IT, AND FANGIRL OVER IT! I’ll be right here with you!” ~ Tracy Vincent, Textual Love blog

“Ednah always, always grabs me, throws me mercilessly into her universes, and keeps me fully enthralled until the book ends. And then I’m left wanting more.” ~ Sara Meadows, Bookcrush Blog

A shirtless Eirik was doing push-ups, the same tattoos I’d seen on his mother coiling under his glistening skin. He didn’t have as many as she did, but that pull to reach out and touch his skin was there. Despite his fewer glowing tattoos, the pull was stronger and somehow different from his mother’s. I couldn’t explain it.

Warmth coiled deep in my stomach and my heart did that weird tremble it did yesterday when he had buried his face in my hair. The corded muscles on his back shifted beautifully, his biceps straining with the effort as he pushed and lifted himself up, then down. Funny, I hadn’t noted the thin dust of blond hair on his arms. I never thought manly fuzz would be intriguing. And who would have known the weak man I’d helped yesterday would have such a masculine body with washboard abs?

The urge to close the gap between us and touch him grew. I wanted to run my hand up and down his back. Would the tattoos react? It was obvious they were magical. It was the only explanation for the pull I’d felt toward his mother and now him.

“Morning,” he said without looking in my direction.

My first instinct was to jump out of sight. Had he caught me ogling him?

Ednah Walters holds a PHD in Chemistry and is a stay-at-home mother of five. She is also a USA Today bestselling author. She writes about flawed heroes and the women who love them.

She Also writes Contemporary Romance as E.B. Walters-from The Fitzgerald Family series, that started with Slow Burn (she has a total of six books in this series) to her new series Infinitus Billionaire: Impulse (book 1) published was in January 2015. Indulge (book 2) released in August 4th, 2015 and Intrigue (Book 3) to be released early 2016. Whether she’s writing about Valkyries, Norns, and Grimnirs, or Guardians, Demons, and Archangels to her love, family, and friendship play crucial roles in all her books.

If you enjoyed reading her books, please consider leaving a review. Reviews can make a difference in the ranking of a book. To be updated on more Runes exclusives, the next book in Eirik’s story, giveaways, teasers, and deleted scenes, join my newsletter. http://bit.ly/EdnahWNewsletter

For the discussion about the series, join her private page on FB: http://bit.ly/EdnahsEliteValkyries

Open only to those who can legally enter, receive and use an Amazon.com Gift Code or Paypal Cash. Winning Entry will be verified prior to prize being awarded. No purchase necessary. You must be 18 or older to enter or have your parent enter for you. The winner will be chosen by rafflecopter and announced here as well as emailed and will have 48 hours to respond or a new winner will be chosen. This giveaway is in no way associated with Facebook, Twitter, Rafflecopter or any other entity unless otherwise specified. The number of eligible entries received determines the odds of winning. Giveaway was organized by Kathy from I Am A Reader and sponsored by the author. VOID WHERE PROHIBITED BY LAW.