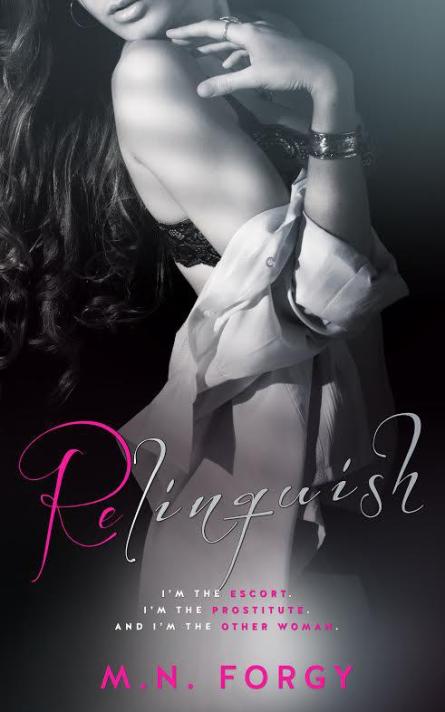 When I read the summary of Relinquish by M.N. Forgy, I was intrigued.

In my world, there is no such thing as love. It is just a lie we whisper into our client’s ear. Love is foreign and hazardous. What I did not expect was to bare my soul to a man who is as egotistical as he is dangerous.

His name is Landon. Despite his blackened soul, he tried to save me, but what he didn’t expect was my torturous fate to catch up with me.
To your father, I’m the escort.
To your mother, I’m the whore.
To the legal system, I’m the prostitute.
In the end, I’m just the other woman.
I have no idea if I will continue to survive, if I will ever find my path aside from the gritty streets I know so well. There is a good chance I will wind up in the ditch like most women in my position. Surrendering to my fate is the only choice I have. I must relinquish it all.

The story I went on to read wasn’t what I took from the description. I expected an experienced, jaded escort who had given up on love to make an unexpected connection with a client who would try to “save” her from a life of darkness.

Instead, this is the story of Charlie, an eighteen year old virgin who “graduates” from the foster system and runs off to Vegas with her seventeen year old foster sister, Jayden. The two of them attempt to find jobs and a place to stay, but have a difficult time of it. Enter the oldest profession.

I felt somewhat duped by the blurb, so it was that much harder for me to get into this book. Many of the sentences were phrased awkwardly, which tended to draw me out of the narrative to scratch my head. Perhaps it’s just me, but the characters—from young Charlie and Jayden to the several years older Landon and his father—seemed to lack maturity and common sense.

When I’m reading fiction, even though I know the story is made up, I have to believe the events within the framework of whatever world they’re set in. Unfortunately, there were a few too many things that didn’t compute.

The way Charlie’s past tied in with the Blackwell Estate was interesting and well-executed. I thought early on I had things figured out, but I was pleasantly surprised to be proven wrong. I felt no connection with Landon, but I was rooting for Charlie and Jayden and adored Landon’s brother, Roman.

The reviews on Relinquish are largely mixed. From looking over some of the comments, I saw a number of readers who didn’t love this book as much as some of the author’s other offerings. I’d certainly be willing to give other titles a chance even though this one didn’t work out for me. In the end, it may be a “cup of tea” issue.