Review: To Serve is Divine 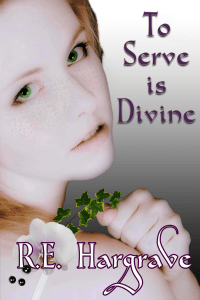 I’m not going to spend a great deal of time explaining the storyline—that’s what the book blurb is for. Catherine (Erin) is a previously abused submissive who captures the attention of a Dom in search of a sub who enjoys pain play. As the story unfolds, readers are given an intimate look into their developing relationship.

R.E. Hargrave drew me into the story with her crisp, descriptive writing. She gives enough details for the imagination to take over without overloading the reader. I thought she did a great job “thinking like a man” when writing chapters from Jayden’s perspective. There was no question I was hearing Jayden’s “voice.” There was no love at first sight; it was a gradual change for both of them. Was it hard to read? At times, but it was far more realistic.

There wasn’t enough plot in the first half of the story to suit my taste. The beginning portions were hot but didn’t do much toward making me care about the characters. That completely changed in the second half of the book. I was able to connect and sympathize with Catherine and Jayden and found myself invested in the outcome of their relationship.

Poor editing has become one of my pet peeves when dealing with published works. Although this was an ARC (advanced reading copy), I’m pleased to say I only saw a few minor errors throughout the entire book. *big smile*

There were a few places in the book that allowed R.E. Hargrave’s descriptive writing ability to really show through for a few brief moments. I’d love to read a non-erotica story by her that lends itself to lengthy descriptive passages; it would surely be a treat.

The ending was a bit abrupt and unresolved for my liking, but I understand the necessity since this is a trilogy—and I’m looking forward to the next installment!