Today we have author Gene Doucette as part of the blog tour for his new release Fixer.  Read the blurb and guest post then go get yourself a copy.  I haven’t read anything from this author before, but I’m really excited to read this one!

What would you do if you could see into the future?

As a child, he dreamed of being a superhero. Most people never get to realize their childhood dreams, but Corrigan Bain has come close. He is a fixer. His job is to prevent accidents—to see the future and “fix” things before people get hurt. But the ability to see into the future, however limited, isn’t always so simple. Sometimes not everyone can be saved.

“Don’t let them know you can see them.”

Graduate students from a local university are dying, and former lover and FBI agent Maggie Trent is the only person who believes their deaths aren’t as accidental as they appear. But the truth can only be found in something from Corrigan Bain’s past, and he’s not interested in sharing that past, not even with Maggie.

To stop the deaths, Corrigan will have to face up to some old horrors, confront the possibility that he may be going mad, and find a way to stop a killer no one can see.

Because there’s something in the future that doesn’t want to be seen. It isn’t human. It’s got a taste for mayhem. And it is very, very angry. Behind the Science of Fixer:

One of the nicest compliments I’ve gotten in the early reviews of Fixer is that the science in the book is complicated and difficult to follow.  I know this seems like a strange thing to find complimentary, but since the science that the premise of the story is based on is science that I invented for the story, having it lumped together—as it has been—with actual and actually very complicated theories like superstring theory and general relativity is pretty cool.

Let me back up.  I don’t customarily jump into new novels knowing a great deal beforehand.  Most of the time I have a notion of an ending and a good idea of a beginning, with almost no clue how to get from one end to the other.  What I do have at the start is an idea.  I don’t mean an idea for a story, I mean an idea that might become a story if I fiddle around with it for long enough.  In the case of Fixer I began with the idea of a person who could see a tiny bit of the future, and who saved people using this talent.

That’s a simple idea.  But then come the questions.  How certain is the future he sees?  Does that certainty impact how far he can see?  What happens to the future he saw when he changes the present?  If this is a testable thing, is it something that could be reproduced scientifically? How does my main character tell the difference between the present and the future?  Can he tell the difference?  Does he see a discrete point in the future or a constant flow of time between the present and whenever he can’t see any further?

And so on.  So those were all the kinds of questions that I asked myself while I was writing, and the answers ended up helping develop the plot.  This was especially true when it came time to developing a central conflict, and the question that got me there was: (spoiler alert) what if someone lived in the future?  How would our present look to them?  What would happen to them if my main character changed the future that they lived in?  Finally: how would you protect yourself from someone like that?

This is how you end up with a complicated plot, a scientific-sounding theory, and a horror story all rolled into one, I guess.  At least it’s how I got there.  Really, I was just trying to understand how it could work, and everything that came after was me trying to make sense of the implications.

Plus the whole thing was just really cool, and I can’t pass on that. 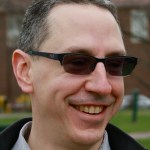 In addition to ghost writing for an immortal man, Gene Doucette has been published as a humorist with Beating Up Daddy: A Year in the Life of an Amateur Father and The Other Worst Case Scenario Survival Handbook: A Parody. He is also a screenwriter and a playwright. Gene lives in Cambridge, MA with his wife and two children.