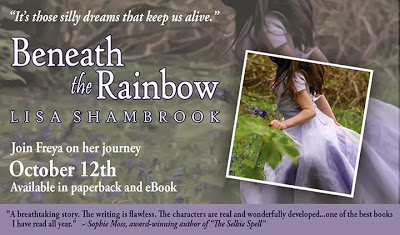 Fellow inkslinger Lisa Shambrook is with me today, celebrating the re-release of her novel Beneath the Rainbow.  Enjoy the excerpt of this fascinating tale, my interview with Lisa, and don’t forget to enter the giveaway before you go!

“It’s those silly dreams that keep us alive.”

Dreams define us, shape us and realise our potential…they make us who we are.

When she dies Freya knows she needs to move on, but is caught within her mother’s grief and the discovery of terminally ill Old Thomas. Finding she can affect the lives of those beyond her heaven she fights to reach her mother and wants to help Thomas realise his final dream.

Meanwhile, her family finds her own list of goals and soon discovers that Thomas has a burning desire to ride a motorbike.

Freya intends to create a rainbow, the last item on her list, to reach her mother, but her pale arcs won’t achieve closure. She needs scarlet like remembrance poppies then sunset orange and sunflower yellow. She makes green like her willow and blue like daddy’s t-shirt. Finally conjuring indigo, the shade of deepening night and violet to match Purple Ted…

Beneath these colours will Freya reach her mother, wait for Old Thomas and be ready to move on?

Discover the importance of dreams and fulfilment in Freya’s heart-breaking and uplifting tale of grief, hope, triumph and joy.

Is your skin prickling yet?  I know I have the shivers… 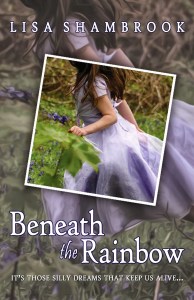 Rachel reached for the remote control and switched off the television. The silence was consuming. Freya relaxed into a lotus position on the floor and watched her mother. Rachel stared at her fingers for a long time, tugging at the quick on her forefinger, before eventually biting off the offending scrap of skin. She ran her fingers over her cheek, and across her lips, as if trying to retrace the kisses left there by Jasmine. Then she began to chew a fingernail and her eyes travelled across the room.

They didn’t settle on Freya sat in front of her, but on Freya’s image opposite on the mantel.

It was her favourite photograph of her daughter. One she’d taken in the woods behind the house. Freya was wearing fairy wings; you couldn’t really see them, because her face filled the frame, but they were there, gauzy and lilac behind her dark hair. She’d been dancing through the trees, singing and chattering, and Rachel had followed with the camera poised for what seemed like ages…then Freya turned and in that split second Rachel caught her, froze the moment of magic forever.

Freya’s upturned nose was creased as her mouth formed a huge, open smile and her green, pixie eyes twinkled as the sun sparkled. Both innocence and mischief were captured on the little girl’s face, melded together, and Rachel loved the picture.

Joe had suggested it was the photo they should give to the police, the one that got shown on the news and the one that depicted Freya forever in the papers, but Rachel refused. She didn’t want that picture tainted, didn’t want it connected in any way with her death, so the traditional school photo had been the one that found its way on to the television and newspapers. It wasn’t even this photograph that appeared in the chapel at the funeral, this one was special; this one belonged to Freya and Rachel, Joe and Jasmine.

She stared at the image and smiled. Then she let the silent tears loose and allowed them to slip down her cheeks unchecked.

When Joe came back in, he glanced at his wife and carefully shut the door. He gently sat down and took her in his arms.

“It was the photo…” she began.

He held her as she wept, and his tears mingled with hers.

Freya breathed slowly and quietly, until it occurred to her that she wasn’t breathing at all. Her body was still doing what she expected, although it no longer needed to. It was a strange sensation to not breathe, but as natural as breathing itself. Instead she listened to her parents’ ragged breaths until they had both cried themselves out.

The room was silent except for the odd sigh and sniff, and her parents relaxed their hold on each other. Joe pulled himself up in his chair and held out his arm, as before, so Rachel could lean close and he could wrap it around her shoulder. They settled and Rachel closed her eyes.

Freya’s soul, she now knew it wasn’t her heart anymore, yearned to reach them. She, very slowly, got to her feet and stood before them. “I’m here…” she whispered once more then she carefully, almost reverently, climbed up onto her father’s lap.

She traced her mother’s cheek with her finger and placed a tiny kiss on her father’s. Then she closed her eyes and curled her ghostly form between them.

Here’s my interview with Lisa Shambrook:

1. Tell us a bit about what inspired you to write Beneath the Rainbow. Did the story turn out exactly as you envisioned at the beginning, and if not, how did things change?

I was walking through our local park when the first line of the book leaped into my head and I couldn’t shake it… “Freya was seven-years-old when she got hit by the car, it was a 4×4 with a bull bar.” The line shocked me, and my immediate reaction was how could I write a book that began with the death of a child? I came home and scrawled it out in my notebook and spent the next few hours crafting the first chapter. I was completely drawn into the grief her family suffered and imagined how it would appear to a child on the other side of Heaven.

It was a story that flowed and I was determined to weave both grief and joy into the tale. It turned out as I wanted, and was a huge change from the children’s fantasy adventures I’d been writing before! It was the first novel I felt good enough to publish and I’ve been blown away by readers’ lovely reactions!

2. Describe your journey to writing.

I used to write very, very long stories for homework at school and filled notebooks with stories at home; so I’ve always loved writing, however, I didn’t take it seriously until I had just had my third child and read the first Harry Potter almost fourteen years ago. I suddenly thought “I could do that!” and did, spending the next decade writing for my children. Then in 2011 I discovered social media and flash fiction, and learned a huge amount about the writing industry. Flash honed my writing and editing skills immeasurably and my writing community online have been priceless!

3. What’s been your biggest challenge as an author, and how have you dealt with it?

Marketing! I’m a quiet, private person and putting myself out there is so difficult. These days writing is not just about the book you write, but you become part of the package, so being able to promote yourself is essential. Learning self-confidence among other wonderful writers online has been incredibly valuable!

4. What projects do you have on the horizon?

I am currently editing the sequel to ‘Beneath the Rainbow’ called ‘Beneath the Old Oak’, aiming to release it at the end of next Summer. A third book in the series is also filling my head with ideas for NaNoWriMo…so I’ll be both writing and editing!

5. Tell us something fun or quirky about you most people wouldn’t know.

I have an anxiety disorder and a touch of OCD…and I’m drawn to acorn cups. I know it sounds odd, but I have an interestingly large supply of acorn cups, which I tend to carry around with me (one at a time, of course!). I justify it as my ‘totem’ like in ‘Inception’…and as I’m a bit of a dreamer it helps me keep my feet on the ground! They fit perfectly on my finger tip…um, quirky enough?

That is awesomely quirky! Thank you so much for sharing with us. 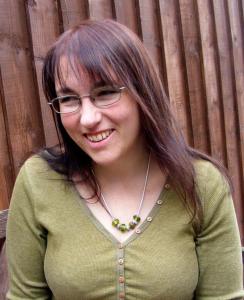 Born and raised in vibrant Brighton, England, Lisa’s lyrical writing is emotional and imaginative. She concentrates on description and colour, and hopes her readers will easily visualise the narrative. Her first book ‘Beneath the Rainbow’ is available on Amazon in paperback and ebook.

A wife and mother, Lisa draws inspiration from family life, faith, memory and imagination. After having her first of three children, Lisa has lived in Carmarthen, West Wales, another town rich in legend and lore.

Lisa loves family time, walking the family’s excitable German Shepherd, beaches, scrap-booking, photography, art and last, but not least, writing…she says “There is nothing better than escaping and immersing yourself in a good story!”