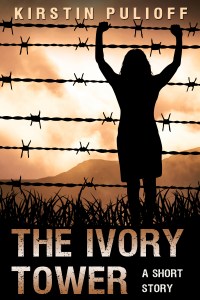 The Ivory Tower is a short story of approximately forty-eight pages. I was in Kirstin Pulioff’s grip from page one. My innate desire to know the answer to absolutely everything was not quenched by this story; however, the part of the story shared was fantastic. I wish this was a full-length novel with all the nitty gritty.

277 –the number sewn into Simone’s shirt. The number that dictates her life

at the protection camp. Regulated by a system of ringing bells, fortified cars, and

rations, the survivors are protected from residual contaminates on the other side of

Breaking the monotony of the highly structured camp, Simone and her friend skip

school to enjoy one of the last nice days of fall. An afternoon game leads them to a new part of the forest, uncovering more than they expected. All thoughts of

protection and rules are shattered by the appearance of the ivory tower. A tower

riddled with a history of danger and death.

A numbered hierarchy by class, rations, guards, being forced to work in the factory . . . it all sounds so familiar. It doesn’t sound like protection, though that’s what they’re told it is. Fear keeps many in, blind faith works for others.

Kirstin Pulioff’s writing is exquisite. I was there in the woods with Simone. My heart was pounding along with hers. The descriptions are so rich.

She had never been this close to the edge before. They had run this small stretch of woods in the back of the camp for years, but never ventured to the outer boundaries. She focused on the barbed wire camouflaged into the stacked brambles and woody debris. Rust and moss grew around the sharp teeth of the corroded metal. And beyond it, what she’d taken for a white trunk revealed itself as the brick base of a tower.

The skillful, tidy stacks of bricks had worn over the years. White paint flecked off the sides. The dilapidated mortar left exposed gaps and piles at the base. At the top, the tower widened. A row of shattered windows looked out behind them, towards the camp. Squinting, Simone glimpsed writing on the dangling threshold marker. The soft charcoal letters described the tower with one word.

“Restricted,” she whispered, her breath clouding the air.

Do you have the shivers yet? I don’t want to talk about the story too much and give anything away. Just read it. My only complaint was the brevity of this piece. This is a story with so many possibilities that you can really sink your teeth into, and it was over much too soon. Despite the short length, I felt satisfied after reading it, even if it didn’t end the way I wanted.

I’d definitely like to read more from this author.