Review: Soldier On by Sydney Logan 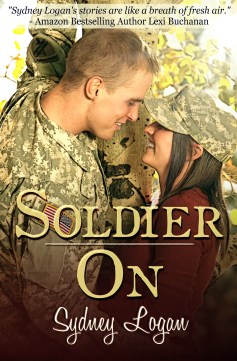 I’ve read a few other books by Sydney Logan, which I very much enjoyed, so when the author approached me offering an ARC, of course I said yes!

Will his call of duty break both their hearts?

Losing her father in Desert Storm has left Stephanie James with a bitter soul when it comes to the military. As a college senior juggling a full course load, Steph’s only goal is to graduate with honors at the end of the semester. She’s focused, determined, and a firm believer in all work and no play. Then she meets Brandon Walker at a New Year’s Eve costume party. Despite his disguise, Steph finds herself attracted to the camouflaged soldier who curls her toes with a scorching midnight kiss.

Brandon is an engineering major and ROTC student from the hills of Kentucky. Growing up as the son of a major general has given Brandon firsthand knowledge of the struggles military families sometimes face. Now that his father’s memory is fading, Brandon is even more determined to make his dad proud and graduate as an officer in the United States Army. Then he meets Stephanie, and suddenly, his focus is less on his military service and more on the pretty brunette who has stolen his heart. When he becomes aware of Steph’s resentment toward the military, he worries their relationship is doomed.

When faced with the realization that she’s fallen in love with a soldier, can Steph’s wounds from the past be healed with love in her present . . . and in her future?

Steph comes upon Brandon in a frat house library during a costume party, and they share an unexpected, steamy kiss that neither of them can forget in the coming days. They eventually link up and start falling for one another. The problem? Brandon is a soldier, committed to four years in the Army in exchange for his paid college education, and Steph long ago decided never to date a soldier. Sounds like big trouble to me!

Everything is going along fine until it comes up in conversation that Steph despises everything about the military and wouldn’t date a soldier. By that time, Brandon is falling for Steph and decides to remain silent about his status with the military. (Bangs my grandma’s cast iron frying pan over Brandon’s thick skull)

I admit the premise of Steph hating the military enough to refuse to date a solder and Brandon choosing to stick his head in the sand and hope Steph didn’t find out was a bit thin for me. I had a hard time suspending my disbelief at the start and groaned when “that” moment came, the one where Steph finds out the truth. I’m so happy the author didn’t go in the predictable spending-months-apart-only-to-get-back-together-in-the-eleventh-hour direction—that would have killed the entire story for me.

Once I moved past my belief issues, I loved this book.

It’s told in alternating POVs between Steph and Brandon, and it was great to hear both sides of the story. They did have different “voices.” My only critique would be that guys think differently than girls do, like it or not, and some of Brandon’s thoughts were a bit on the flowery side.

The secondary characters were wonderful and well-developed. Sometimes I read a book with minor players that come across cardboardish, but Ms. Logan brought all the characters in Soldier On to life. What a payoff—varied, interesting people each with their own quirks and attitudes and belief systems.

The writing, as always, was spot on. Descriptive enough to draw me in, but no sign of purple anywhere. There was no unnecessary plot filler, and the transitions were very smooth from one scene to the next. The length of this one felt right. A critique I had for Mountain Charm was it felt more like a novella, but Soldier On was a complete, satisfying novel for me.

Not giving away any details, you’ll just have to pick up a copy and read it, but I love the progression of Steph and Brandon’s story once the truth comes out. Sydney Logan’s writing keeps getting better and better.

Soldier On is a heartwarming and heartbreaking story of two people falling in love at an inconvenient time in their lives with the deck stacked against them.  Check this one out for sure!