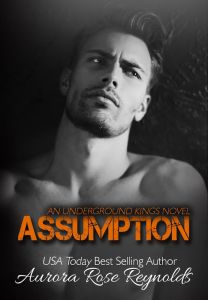 Amber Freeman was always taught that she had to rely on her beauty to get anywhere in life. She went from pageant girl to Vegas stripper, turning her inner self to the off position when she entered the club. Deep down, Amber wants to be more than a pretty face. She works at the strip club to put herself through nursing school and fights the ingrained teachings of her abusive mother.

A hit man kills some high-end clients during a private meeting, leaving Amber as the sole survivor and witness. She’s forced to go into hiding until the killer can be found. Enter Kenton, the sexy bounty hunter she’s sent to stay with. Sparks start to fly almost immediately. Kenton makes assumptions about Amber from the moment she arrives. I don’t want to ruin the story, so I’m not going to go too deeply into the details.

Assumption has a great cast of characters. I felt for Amber and enjoyed watching her bloom while living in Tennessee. Considering Amber was only with one man and has been celibate for the past decade, the insta-love was hard for me to swallow. Putting that aside, Kenton seemed like the perfect guy to draw her out of her shell.

While I enjoyed the story itself, in my opinion, the book needed additional drafts to tighten up the writing and a more thorough edit. There were many instances of repeat words used close together (sometimes in the same sentence) and a few cases of similar but incorrect word usage that could have been easy fixes. The transitions between certain scenes and time periods left me confused. I’d love to read this after a thorough polish.

Kenton’s POV grabbed me harder than Amber’s and didn’t seem as rife with the same issues I mentioned above. Perhaps the author connects more effectively with the male perspective, or maybe it was the nature of the story at that point (no spoilers).

Assumption is the first book I’ve read by Aurora Rose Reynolds, and I’d certainly try another.