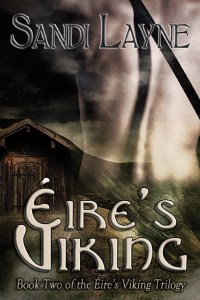 I absolutely love Sandi Layne’s writing. Nobody had to invite me to review her newest release, Éire’s Viking—I begged for a review copy. Sandi Layne is one of those authors who should be well-known and on the best seller’s list for her incredible talent.

If you haven’t read book one, Éire’s Captive Moon, you should go do that and then come back here. Go on, I’ll wait.

By the end of Éire’s Captive Moon, I was firmly Team Agnarr. I was upset that Charis chose Cowan and fully expected her snafu to be rectified in the next installment. Wrong! The author warned me of this, and I wasn’t sure I’d get past it. Still, I gave the first book a rare five stars, so I had to trust.

Éire’s Viking is all about Agnarr and his journey. His love interest is none other than Charis and Cowan’s adopteddaughter. Can you say awkward? I was skeptical at the beginning, but Aislinn won me over. No, it isn’t because her name is so similar to my own (last name). Her character and morals won me over. And Agnarr has a lot of work to do in order to win her heart and fit in with the people of Éire as he makes the move to a new land with nothing but the tunic on his back (when he manages to wear it!) and his trusty sword.

As in the first installment, Sandi Layne’s writing is deliciously descriptive without being overly purple. Her obviously well-researched prose draws you back in time, offering a glimpse into what life was like in the time of the Vikings. There’s drama between Agnarr and Charis, Agnarr and Aislinn, Agnarr and the townspeople—you seeing a pattern here?—and more drama when the Danes appear, and then Agnarr’s own people. Amid all this is a budding and blooming romance between Agnarr and Aislinn. He wanted Charis a decade ago but actually falls in love for the first time with this feisty woman who agrees to take care of him even after she finds out just who the handsome Viking is.

Well-written, well-edited, and I see glimpses of what book three might be about—maybe Turgeis and Ide the flame-haired? Just my guess. I couldn’t put it down and eagerly await the next installment.