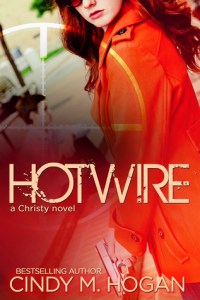 Hotwire is a fast-paced novel about the investigation a car theft ring, but something far more sinister is uncovered during the operation. Although Hotwire is the second book in the Christy series, I had no problem reading it as a stand alone.

The best part of the mission is her attractive handler, Jeremy, and her new team. The worst part? The sociopath masquerading as the academy’s most popular guy.

But soon she realizes the car thieves are much more than they seem. Her simple spying mission becomes more dangerous than anyone imagined. If the organization discovers her true identity, they won’t hesitate to kill her, and if she fails, others will suffer the same fate.

Christy is a spy posing as a student in a private academy. Her assignment is to discover and infiltrate a car theft ring. To me, it seemed a little too easy for Christy to locate the big hitters and worm her way in with them, especially because the thieves would want to keep their illegal activities secret.

Christy’s team and their various skill sets were interesting, though other than Jeremy, the rest of them seemed to blend together, and I had a hard time keeping track of who was who. On the other hand, the characters Christy was involved with at school and through the theft ring were well drawn and unique. The action, danger, and suspense throughout kept me on the edge of my seat, wondering what twists and turns would come next. There’s a touch of forbidden romance thrown in, too. A crush turns to a declaration of feelings that can never be acted upon.

The story wasn’t predictable, and nobody played the perfect hero. Characters remained human, along with the accompanying penchant for human errors and weaknesses. At times, the writing seemed a bit awkward, especially in the first half of the book. The second half read smoother to me. Perhaps the author excels in writing action. Ms. Hogan did write some fantastic fast-paced scenes, leading up to a heart-pounding, satisfying conclusion.

This was my first book by Cindy Hogan, and I’d certainly check out other stories by her.