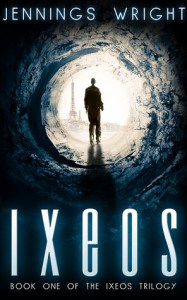 Imagine enjoying a relaxing vacation at the beach and following some ducks into a tunnel that leads to an alternate earth. That’s what happens to the McClellands. With the first novel in a trilogy, IXEOS, Jennings Wright created a unique scenario—an alternate version of earth that was taken over by aliens who enslaved humans. Neahle, Clay, and Marty McClelland join a special group of “outsiders” whose sole purpose in life is to disrupt and, ultimately, defeat the aliens.

The story was exciting right from the beginning with the pace continuing throughout. I connected and sympathized with most of the characters, although there were some that felt two-dimensional. The writing was descriptive without being overly wordy, and I felt like I was there alongside the characters.

There were some grammatical issues; the story could definitely benefit from a thorough edit. Grammar and punctuation errors are hot buttons for me when reading published material, and self-published authors need to be especially diligent about editing. The errors weren’t horrific, and there weren’t an abundance of them, but there were enough to be noticeable.

I was disappointed there was no real interaction with the Firsts (aliens). Although they’re talked about a great deal, and a few are killed, we never actually get to meet one. There are many questions floating through my mind that I hope to see addressed in a future volume. One of those would be: If the only difference between the two versions of earth, including major historical events, is that one was invaded by the Firsts, why aren’t there doppelgangers? The invasion certainly caused the future of the two planets to diverge, but by how much? Another big question has to do with why the Firsts bother to enslave the humans at all. They (the Firsts) are boring, unimaginative, and emotionless. They’ve gone to an awful lot of trouble to enslave a race of rebellious people, using intricate coded messages and a perpetually moving prison. I hope the author delves into these issues; I know I’m not the most patient reader when it comes to trilogies.

Without posting spoilers, I’ll just say the big event at the end of the book went too smoothly to feel realistic within this new world. The sappy part of me that doesn’t want to see anything bad happen rejoiced, but the realist in me balked. After all the build-up, I expected a more difficult and detailed account. That aside, I really enjoyed IXEOS and eagerly await the next installment.