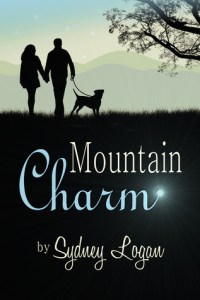 “True love and sweet whispers, till death do us part;
Send someone to love my Appalachian heart.”

At the age of thirteen, Angelina Clark lights a candle and whispers the same love spell her ancestors did at the same age. As the years go on, Angelina grows jaded and looks at magic and being a witch as more of a burden than a blessing. She doesn’t believe in that old love spell or that her true love will appear when she turns twenty-one.

Dylan Thomas shows up in Maple Ridge to write a story on Appalachian Magic. When Angelina finds him waiting on her porch on her twenty-first birthday, she’s less than thrilled and less than friendly—pointing her “Appalachian Magic Wand” at him and kicking him off her property.

What commences is a slow thaw. Dylan circles around Angelina, looking for ways to penetrate her armor, while Angelina fights with everything she has not to let the charming reporter in. Soon it becomes about much more than getting a story, but there are still Angelina’s doubts and fears to surpass.

I adore Sydney Logan’s writing. It’s crisp and descriptive—I always find myself right there—without bogging down the flow of the story. There are no wasted words or unnecessary scenes that drag on and on. Her characters are well drawn and intriguing. Angelina’s dog, Cash, was a character all on his own. I’m a sucker for animals in stories, especially when they play their part in the plot. The witch angle was interesting, though I wish there had been more magic in the story or an explanation of how Angelina’s family practiced as witches.

The chemistry between Dylan and Angelina was intense and the fade-to-black love scenes well written. There was nothing explicit, but the reader is given hints of what went on behind closed doors.

I found this book to be well edited, something that’s extremely important to me when reading published works.

While I appreciate leaving out extraneous scenes that aren’t critical to the plot, at times it felt as if there was some “meat” missing, and the transition from one scene to the next was somewhat abrupt. Although I’m not sure of the final word count, the thought crossed my mind that with the brevity of many of the scenes this might have been better suited to a novella than novel.

I would have preferred more drama. There was an intriguing situation regarding one of Angelina’s ex-boyfriends that had so many delicious possibilities, and I was a bit disappointed it wasn’t explored.

Sydney Logan knows how to spin a tale of sweet romance—low angst, great descriptive writing, intriguing characters, beautiful backdrop. If this is the kind of story you like to read, this one’s definitely for you!