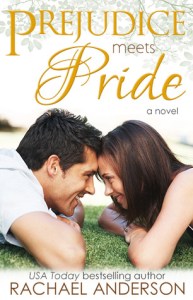 Prejudice Meets Pride is a delightful, heartwarming romance. I read another of Rachael Anderson’s novels and liked it very much, so I readily agreed when the opportunity to review her newest release came up.

Emma Mackey is a stubborn woman with a heart of gold. She gives up her dream job in order to take care of her brother’s two young girls after his wife is tragically killed. An aunt bequeathed a house to Emma, and she moves there with the girls. It’s rundown and needs work. Funds are low, but Emma is determined to make the best of things for the sake of her nieces.

Kevin Grantham is a successful pediatric dentist who’s dating a woman his snobby mother approves of and believes his life is on track. He’s less than thrilled when a woman with two young children and a beat-up old car moves into the rundown house next door.

Emma doesn’t like to rely on anyone. Kevin doesn’t see anything wrong with helping out someone in need. She’s annoyed that he keeps doing things that leave her feeling indebted to him. He can’t understand why she has such a hard time accepting help. Each of them make incorrect assumptions about the other, and what ensues is a gradual and often humorous path winding toward understanding. Eventually, they both succumb to the undeniable attraction that crackles between them.

The characters, situations, and drama in Prejudice Meets Pride are lifelike and realistic. The romance is both sweet and hot. I generally enjoy love scenes on the spicier side, but Ms. Anderson has a knack for writing clean romance that pulls me in without leaving me disappointed.

If you’re looking for a well-written, well-edited, sweet romance with a healthy dollop of humor, Prejudice Meets Pride is for you! I’m looking forward to reading more from Rachael Anderson.