Review: Who R U Really? by Margo Kelly 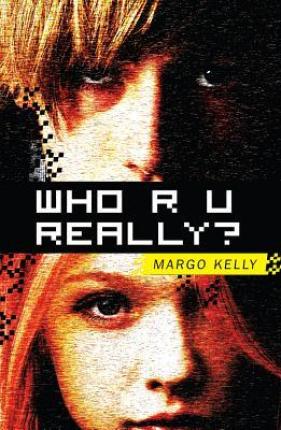 Thea’s overprotective parents are driving her insane. They invade her privacy, ask too many questions, and restrict her online time so severely that Thea feels she has no life at all. When she discovers a new role-playing game online, Thea breaks the rules by staying up late to play. She’s living a double life: on one hand, the obedient daughter; on the other, a girl slipping deeper into darkness. In the world of the game, Thea falls under the spell of Kit, an older boy whose smarts and savvy can’t defeat his loneliness and near-suicidal despair. As Kit draws soft-hearted Thea into his drama, she creates a full plate of cover stories for her parents and then even her friends.

Soon, Thea is all alone in the dark world with Kit, who worries her more and more, but also seems to be the only person who really “gets” her. Is he frightening, the way he seems sometimes, or only terribly sad? Should Thea fear Kit, or pity him? And now, Kit wants to come out of the screen and bring Thea into his real-life world. As much as she suspects that this is wrong, Thea is powerless to resist Kit’s allure, and hurtles toward the same dark fate her parents feared most. Ripped from a true-life story of Internet stalking, Who R U Really? will excite you and scare you, as Thea’s life spins out of control.

Have you ever wondered who’s really on the other end of a chat session? This book takes that ominous question and turns it on its head.

As the parent of a soon-to-be tween, I was eager—and a little scared—to read Who R U Really? This was a gripping, suspenseful, heart-pounding thriller. Once I got started, it was hard to put the book aside for things like work, cooking, sleeping . . .

The author did a great job presenting the point of view of a teen girl. I can recall having many of the same eye-rolling thoughts about my own parents when they wouldn’t let me have my way. As an adult, I realize why there were certain rules, but that’s hard to comprehend when you’re young and yearning.

Thea has a typical case of teen angst, anxious to be in love and in a hurry to make a special guy the center of her world. The fact that her parents don’t make it easy seems to add fuel to the fire, and before long, the typically honest Thea meets a witty, charming older boy while playing an online game and descends into the murky waters of deception. “Kit” quickly sucks Thea into his world, regaling her with tales of his abusive father and bouts of suicidal thoughts interwoven with playful dialogue and comments suggesting she’s the only one that understands him. It all seems rather innocent until Kit admits his real name is Derek and convinces Thea to give him her cell number so they can text and exchange pictures. The photo he sends her is grainy and hard to make out. Eventually, Thea begins to have doubts about the relationship and who she’s really talking to.

Nothing seems to add up anymore, but Thea is so into Derek that she ignores the alarm bells sounding in the back of her mind. She’s told so many lies and burned so many bridges, there’s no one to turn to.

The writing is clean and simple, what it should be with a teen narrator. There weren’t unnecessary scenes to slow things down; the story hummed along at a fast past. I couldn’t flick through the pages fast enough, anxious to find out what happened next.

While I found Thea to be a realistic teenager, I thought her parents went overboard with their protectiveness to the point of disbelief. At times, it felt as if there was a lecture interwoven in the story. The events themselves are sufficiently scary and teach a number of lessons, so I found this somewhat irritating.

There were some predictable elements to the story, but the author tossed a few red herrings in there. Overall, I really enjoyed Who R U Really? and think it should be required reading for all parents of teens and perhaps the teens themselves. My daughter is too young to read the book, but we had discussions while I was reading it. She was intrigued by the story and asked me each night if I’d read more and what was happening. It’s a very entertaining way to drive home the point that you really don’t know who’s on the other side of the screen . . .