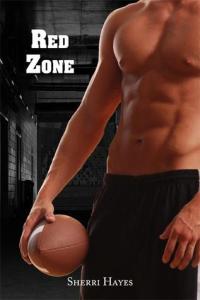 Red Zone is the first book by Sherri Hayes I’ve had the pleasure of reading. Gage Daniels is a professional football player who’s been receiving threatening letters. Enter Rebecca Carson, FBI agent on hiatus, brought in on the case by her former partner. She’s hired to pose as Gage’s girlfriend as they attempt to figure out who is after him and why. (You can see where this is going, right?)

The author’s writing is descriptive but gets to the heart of the matter without being overly flowery. I felt as if she had an excellent grasp of a male character’s perspective. Gage wasn’t immediately smitten with Rebecca—aside from the typical male cockiness. He was strong, playful, and sexy. Definitely swoon-worthy.

Rebecca had some obvious intimacy issues, and it was clear she used her job as an FBI agent as a shield. I connected with Gage immediately, and really enjoyed the entire cast of characters with the exception of Rebecca. I had a hard time identifying or sympathizing with her. Just when it seemed some growth was occurring, she’d take several steps back. It was both frustrating and mind-boggling.

This author can write the hell out of a love scene. The sex was hot and steamy without using a lot of graphic or, conversely, euphemistic terms.

A few minor critiques. I guessed who the stalker was early on, so that fell a bit flat for me. The stalker storyline seemed to be secondary, so much so that at times I almost forgot about it. “Walked” seemed to be the only word employed for how a character got from one place to another—no stalking, traipsing, strolling, ambling. Just walking. There may have been other verbs used, but after a while, that word jumped off the page at me to the point of annoyance.

While reading Red Zone, I found out this was not the first book about the schmexy Daniels brothers. Behind Closed Doors is already out and features Chris, and the next book in the series (due out sometime in 2014) will feature Paul. Can I just say, I can’t wait to get my hands on both of these? I was very impressed with Paul in Red Zone, so I’m really looking forward to his volume, but I think I can console myself with Behind Closed Doors while I wait for it to come out. *wink*

I’ll be checking out more of Sherri Hayes’ books in the near future. Thank you to TWCS Publishing House for the ARC.

Read my interview with Sherri Hayes.