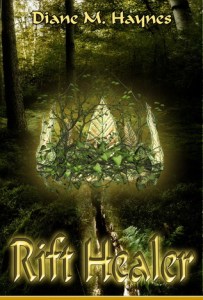 Gisele Westerfield calls upon gifted members of her family to assist in healing the enchanted forest. The only ones who bother to show up are two teens: her grandnephew, Micah, and his distant cousin, Selena. Reluctantly, Gisele adds twins, Haley and Lacey, and Lacey’s boyfriend, Taylor, to the small group who must heal the rifts in the enchanted forest before the next full moon or chance the horrors being unleashed upon the outside world.

In addition to the “healing” excursions into the forest, the reader is treated to the side stories and eventual drama that affects the small band of healers. Despite the fact that division is dangerous when trusting ones life to partners, drama ensues that has the potential to threaten both the lives of the others and the entire magical mission.

From the first page, Diane Haynes jumps right into the heart of the story. Many of the mistakes first-time authors make were absent in this debut novel, which brought a smile to my face. Backstory was shared a bit at a time, and only what was necessary to the story. There were no extraneous scenes or wasted words. The writing was descriptive enough to stimulate the imagination, drawing the reader into the story, but not to the point of distraction. The story held my interest, and I really connected with and cared about the characters.

It’s my opinion the story would have worked better if the kids were a few years older. They all came across too mature and worldly for their ages and, realistically, too young for many of the story’s events.

The book could use a tighter edit. There were a number of punctuation errors throughout—enough to draw me out of the story at times. I am known to be critical when it comes to editing, but it’s my opinion that published works should not have more than a few errors.

The characters were well-drawn, many lessons were learned, and all of them grew through their shared experiences.

Rift Healer is a story of love, faith, friendship, trust, and magic. It’s the first book in a series but can be read as a stand-alone story, which is as it should be. This is a terrific debut novel, and I look forward to reading more from this author.