Review: The Rules Regarding Gray 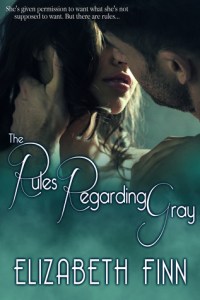 I don’t review many erotica novels and typically shy away from love triangles. I’m not sure what made me want to read The Rules Regarding Gray, but something about it caught my eye. I’ve never read anything by Elizabeth Finn, so that wasn’t it.

First off, I feel the need to state that this book is filled with explicit sexual content. I don’t consider myself easily shocked, but the way Ms. Finn wrote the love scenes in this book made me uncomfortable at times. That’s not to put down the writing itself because I was fascinated from page one right up until the end. I love her writing style and how very deep she goes into the emotions of the characters; I wasn’t always comfortable with the graphic nature of some of the scenes or the extended focus on certain acts. Sometimes less is more.

Gracelynn is drowning in an existence that fails to fulfill her. A ballerina by trade, she’s devoted her life to the stage, sacrificing adventure for discipline. When her boyfriend gives her permission to want what she’s not supposed to want, can she walk away? Or will she leap?

Jasper isn’t a man with many boundaries, and “sharing” a woman with his best friend is hardly a new endeavor. But the moment he meets Gracelynn he realizes she’s different. She leaves him feeling alive in a way he’s not used to, and for the first time in his life, he understands what it means to be wanted… Cherished… And he needs more…

But there are rules—rules that forbid Jasper from truly having her. As forbidden desire spirals out of control, Jasper has to decide if he’s willing to fight for something that doesn’t truly belong to him. His best friend doesn’t deserve her, but is Jasper strong enough to believe he does?

Part of me couldn’t understand what Gray was doing with Ian, who proved himself to be of questionable moral/ethical character almost immediately. At the opening of the story, Ian and Gray have been dating for a few months. There’s no history offered on their relationship, but one can only presume that Ian is Ian (you’ll understand if you read) and wouldn’t have been able to hide his despicable nature for long.

I was dubious when Ian suggested sharing Gray with his best friend. I wondered how the author would pull off Gray making a decision to do something like this when she’s led a rather innocent life thus far. The progression worked for me even if the decision didn’t.

Jasper (Ian’s best friend) is a complex character. For me, he was the star of the book. Jasper was blunt, sexual, sometimes downright raunchy and owned it. The way the author wrote him brought him right up off the page. Jasper’s history is so ugly and sad, it’s no surprise he was damaged—which I guess explains him being friends with a jerk like Ian at all.

Gray also shows growth throughout the book, though not as fast as I wished. I did a lot of yelling at her and Ian while reading.

There’s no reason a reader would be torn about the triangle because Ian is such a disgusting excuse for a human being, I can’t imagine anyone rooting for him. That’s why I felt okay about reading this almost immediately. Besides, Ian is the one who suggested “sharing” his girlfriend with his best friend and making rules—such as no kissing or touching certain body parts.

“He wasn’t supposed to want her this much. He was supposed to want to play with her and nothing else, but every time he looked at her all he could think about was the word more. More. He needed more of her.”

This book is an emotional roller coaster. It twisted and turned, shaking and stirring and jumbling, drawing me into Gray and Jasper’s turmoil over what they felt, what they were doing, how it could possibly end without someone being hurt.

“I guess I imagine real closeness is what happens when you meet someone who can … fill in the missing pieces and make you feel whole and satiated. They make you a solid thing, rather that a fading ghost of a person. They make you feel at peace as opposed to always feeling like you’re searching for something to fill the void.”

The Rules Regarding Gray was well-written and captivating. I loved the connection between Gray and Jasper. Honestly, I would have enjoyed the book a bit more if many of the sex scenes had been cut down or some of the graphic detail softened. Despite my discomfort with certain scenes, I enjoyed the journey of this book so much that I can’t help but recommend it.