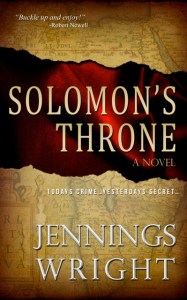 Solomon’s Throne is a treasure hunt that spans countries and centuries. The author intersperses events from the 1600s into the present day. I admit to being a bit thrown by this at first, but it soon settled into a comfortable rhythm that seemed to run in tandem with present day events. I grew to enjoy the layered stories for the most part. I did have a bit of a hard time believing Gideon Quinn, a mere employee of the “keeper of the secret,” would be willing to take off to another country with his wife, risking life and limb to chase a treasure for his employer.

I enjoyed the journey and found the different locales Gideon and Rei visited interesting. Jennings Wright has a way with descriptions that drew me into the story, and I felt like I was on the journey with her characters.

A thorough edit would have taken care of numerous typos and punctuation errors, which went beyond what I think is acceptable from a published work.

As the story drew toward its close, I wondered what twist was coming, what big secret or shocking event would be revealed. This never happened; thus the end fell a little flat for me. I found this to be a cozy “find the treasure” sort of tale. An enjoyable debut novel.