Review: In Velvet by Burt Weissbourd 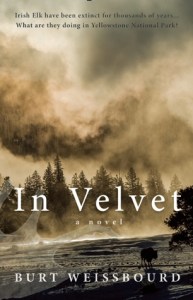 In Velvet is a fast-paced thriller set in the mountains of Yellowstone.

The northwest corner of Yellowstone Park is closed for bear management, and Rachel, a bear biologist, is discovering some very startling animal behavior—grizzlies denning in June, swans at their wintering grounds in summer, what appear to be Irish Elk, an extinct species, with huge palmated antlers. There are also horrific mutations in the young—elk calves with no front legs, earless bear cubs, and eaglets without wings. What has gone wrong? Why is this area closed? Who’s covering up these animal abnormalities in the Park?

A non-stop thriller set in some of North America’s wildest country, In Velvet takes you deep into the hearts of a hard case local detective and a Chicago cop as they take on a corrupt sheriff, a pathalogical poacher, and a lethal black ops manager to solve this ghastly mystery and restore the natural order in Yellowstone National Park.

The complex plot is also host to a complex and quirky set of characters—from a bear biologist who discovers strange happenings and odd animal mutations, an ex-detective fly fisherman, an ex-Chicago policewoman, and disturbed sheriff to a certifiably crazy poacher, and let’s not forget top secret government agency involvement.

There’s a lot going on in this novel. One thing that disturbed me throughout the story was the rapid point of view changes, many in short, choppy bits. This is just my opinion, but I found many of the head-hops unnecessary and would have enjoyed the story a bit more if the chapters were more cohesive. Despite that, I really liked this book.

The descriptions, especially of Yellowstone, were rich and breathtaking. I thoroughly enjoyed Burt Weissbourd’s writing style. Although the scientific explanations behind what the bad guys were up to were a bit complex, they were explained in an understandable enough way to enjoy the story without my eyes glazing over. The characters were realistic, unique, and quirky. I enjoyed them all, even the ones I despised. There’s a danger when blending multiple plots and subplots, but it was done seamlessly here.

This heart-pounding thriller will string you along and bring you right to the edge before reaching a most satisfactory conclusion. If this were a movie, it’s the type that would have me walking out of the theater only able to initially say, “Wow!” I look forward to reading more from Mr. Weissbourd.