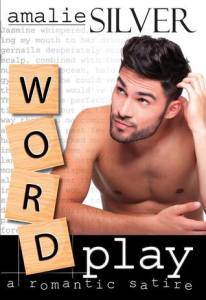 Word Play is a fun, flirty, laugh-out-loud romance with twists of deception and misunderstanding.

Struggling to make ends meet as a mystery writer, he sold his soul – and his pride – as he pedaled sex and lust writing under the pen name Christoph Strong.

No one knew he was the one behind the steamy stories on the bestsellers lists. And he planned to keep it that way.

Until he met her.

Monica Singer, an infamous blogger, is keen to discover the truth of his secret identity.

During a chance meeting at a book convention, Michael and Monica form an instant connection. And soon, an industry rivalry becomes something else entirely.

But as Michael starts to let his guard down, he doesn’t realize that the person he’s learning to trust may be hiding secrets of her own.

Secrets that could ultimately destroy everything.

Michael Rourke writes mysteries. Christoph Strong writes erotica. Michael’s mysteries barely pay the rent. Christoph’s erotica is on the best sellers list. The two men are one and the same. When “Christoph’s” agent sends him to a book signing, Michael chooses to break out of his everyday mold and fully embrace the persona of his erotica-writing pseudonym.

When Michael/Christoph runs into blogger Monica Singer, the meeting starts off a chain of events neither of them could have predicted. What follows is hilarious, frustrating, hot, and romantic.

Word Play pokes fun at authors, bloggers, and the publishing industry in general, offering a hilarious look at the inside. Michael’s shame about writing erotica cracked me up, and the reaction of one of his mystery writer friends was priceless. The connection between Michael and Monica sizzled, and their banter added an enjoyable layer to their budding relationship. The events that pulled the two apart felt a little flat for me (since we’re dealing with two intelligent adults), but it didn’t wreck things for me—just caused a little bit of grumbling.

I enjoyed the word entries at the start of each chapter, but while the blog entries were amusing, I missed where they fit into the story. They just felt like filler that slowed down and pulled me out of the action.

I have to give props to the author for her portrayal of Michael. Many times, a male POV comes across as too flowery or female-like. It’s a fact that men and women think differently, and Amalie Silver did a great job.

I had a hard time putting this book down to do mundane things, like work and make dinner for my family. If you like spiciness, humor, drama, and a unique story, give Word Play a read!