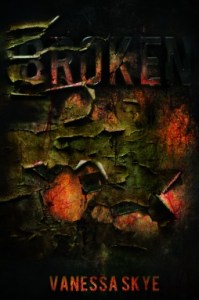 Broken is the second installment in The Edge of Darkness series. It’s possible to read Broken as a standalone novel, but I highly recommend reading The Enemy Inside first. There are many nuances and references to the first book in Broken, and reading the first book will offer a deeper understanding.

A mother is murdered in an apparent robbery.

A young woman is raped and beaten in a home invasion.

Chicago Detective Alicia “Berg” Raymond doesn’t believe in random crime and is certain both cases are more than they seem—but can she trust her instincts, or is she too distracted by the feelings she has for former partner and new boss? For Berg, the need for justice burns deep and fills the emptiness where therapy and relationships fall short.

She’s certain the husband knows more than he’s willing to admit, but the trap to catch the killer is the loophole that sets him free.
The rapist is caught and sent to prison, but when Berg gets closer to the family devastated by his depravity, their behavior doesn’t add up.

As Berg fights to prevent another murder, she crosses the line between hero and villain—and there’s no turning back.

Berg is the central character this series revolves around. She’s a kick-ass detective with exceptional instincts, and her personal life is a complete mess. She has secrets and addictions precipitated by abuse from her past. Berg is in love with Jay, her ex-partner and captain of their precinct, but her feelings of unworthiness lead her to reject him over and over. To further complicate things, Berg’s new partner, Arena, swings back and forth between belligerence and affection toward her.

Broken is a complex mix of gritty detective work, diabolical suspects, a peek into Berg’s addictions, and a reluctant love triangle between Berg, Arena, and Jay. Toss in Carla, an ADA who has the hots for Jay, and you have a powder keg with a short fuse.

Vanessa Skye expertly straddles the line between descriptions that pull you right into the story and a fast-paced narrative that will leave your heart slamming. She did a wonderful job writing Berg. I found myself wanting to strangle Berg one minute and hug her the next. Berg is so trapped within the web of her past, it seems impossible to break free. The villains in Broken were disgusting human beings. They were almost too bad and untouchable, if that makes sense.

Many misunderstandings occur between Jay and Berg, which is understandable, but eventually, I had the urge to throw the book across the room when it became an extended ping-pong match. No spoilers, but Jay caved to something in a way that seemed out of character for him and written for the drama factor. I also had a few issues with the lead-up to the “big moment.” There were some plot inconsistencies, and it didn’t quite work for me.

Despite any reservations I had over certain plot points, I thoroughly enjoyed this book. It was well-written, well-edited, and I can’t wait to read the next one in the series! Ms. Skye left us a little hint in the last chapter of the trouble that might be plaguing Berg in the next volume. Juicy.