Book Two in The Edge of Darkness series 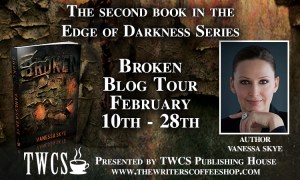 I loved Vanessa Skye’s debut novel, The Enemy Inside, so I was stoked to have the opportunity to participate in the blog tour for the second book in the series, Broken.  You can read my review here, and don’t forget to enter the giveaway before you go!

Published by The Writers Coffee Shop

Available from Amazon, Kobo, Barnes and Noble, and TWCS

Summary:
A mother is murdered in an apparent robbery.
A young woman is raped and beaten in a home invasion.
Chicago Detective Alicia “Berg” Raymond doesn’t believe in random crime and is certain both cases are more than they seem—but can she trust her instincts, or is she too distracted by the feelings she has for former partner and new boss? For Berg, the need for justice burns deep and fills the emptiness where therapy and relationships fall short.
She’s certain the husband knows more than he’s willing to admit, but the trap to catch the killer is the loophole that sets him free.
The rapist is caught and sent to prison, but when Berg gets closer to the family devastated by his depravity, their behavior doesn’t add up.

As Berg fights to prevent another murder, she crosses the line between hero and villain—and there’s no turning back. Vanessa Skye has always had a love of words and spent her school years writing poetry, speeches, and fictional essays.
After completing a Bachelor of Arts in print journalism and studying psychology at Charles Sturt University, Vanessa got a job at Australia’s largest publisher of regional and agricultural news and information, Rural Press, where she worked as a journalist in the central west of New South Wales for four years.
Thousands of stories later, Vanessa decided to move back to Sydney and try her hand at public relations while studying for a master’s degree in communication.
Skip forward a few years and Vanessa was once again joyfully studying various psychology subjects while managing a Sydney public relations firm. Enthralled with examining the motivations behind people’s actions, Vanessa realized what she really wanted to do in life was combine her love of words with her fascination for human behavior. So Vanessa quit public relations to begin the significantly more impoverished life of a professional writer.
Inspired by a recurring dream, Vanessa wrote her crime fiction debut, The Enemy Inside, which challenges the concept of justice, asks if the need for vengeance sometimes justifies murder, and explores whether you can ever heal from childhood abuse. Broken is her second book in this series. In her spare time, Vanessa wrote a short story, The Piece, which was published in February 2012, by Dark Prints Press as a part of the ‘One That Got Away’ dark fiction anthology.

Vanessa now works as a freelance writer, lives in Sydney’s northern beaches, and tries to immerse herself in salt water at least once a day.

I have been diagnosed with clinical depression/situational depression years ago. It is very important that I mention this prior to reviewing “Broken” by Vanessa Skye. . . as it is very pertinent to where my mind was just prior to starting this novel. I had a depression breakdown about a week before starting this book. Little did I know, when requesting this book for review from Net Galley, that I’d be reading a book that reflects my soul at current state. Biggest plus of this book was the creative use of song lyrics before the start of each chapter. So poignant, so stark, so dead on. The way the author writes about depression the lives within the main character is so gut twisting, I too found myself hard to breathe.“Berg”, the main character, is a detective who is so deeply whittled with wounds from childhood it literally incapacitates her every aspect of life: Living, Breathing, Loving and accepting Love, Communicating, Sleeping. She’s a wreck of a woman… She’s BROKEN. However, the pain and abuse from childhood makes her ONE HELL OF A DETECTIVE. Her senses are sharp. She sees things her male counterparts cannot. She has the highest closure rate on cases. However, your detective skills become questionable when she tries to juggle love and her heart, her past, a new partner that is relentless about sleeping with her, and an ADA who’s a total narcissistic bitch. The characters in the book are so well written you either hurt for them, hate them, or love them.Vanessa Skye is a strong, poetic, articulate author. Broken is a second part novel, from the “Edge of Darkness” series. I have not read the first novel, “The Enemy Inside.” The author did a fine job of creating a second book that reading the first one is not required. This is a great stand alone book, which has areas of reflection into the first novel. I would love to read this book, as I’m highly attracted to the main character, her flaws and the author’s ability to bring it all to life.I am so very impressed with this book. It gripped my innards and ripped them out, little by little, each time Vanessa wrote about the deep, sinking, killing feeling depression has on a person.

Connect with Vanessa Skye on

Other books by Vanessa Skye