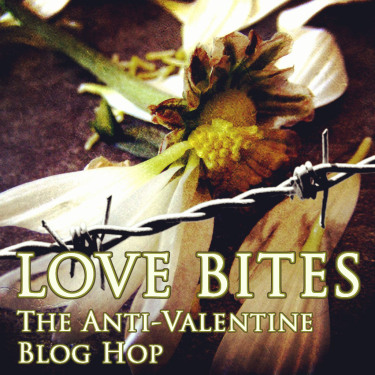 This is my entry for Love Bites: The Anti-Valentine Blog Hop.  What a fun idea!  I couldn’t resist penning a tale.  Enjoy, and please visit the other stories in the hop by following the link at the end of my story!

Carissa exulted in the burn of her calves, the searing of her lungs, and the blessed, all-encompassing silence. As she adjusted her backpack and continued climbing, snow crunched beneath her boots.

True peace. No Jared. No nagging friends or family asking soul-slicing questions. Just the snow-laden, rocky path up the mountain, leading to a breathtaking view Carissa could enjoy—alone.

A bird twittered nearby, and a couple of squirrels chased each other up a tree, chattering away.

Carissa envied the easy balance found in nature. Humans didn’t live in harmony. Oh, no. When they twittered, it was to announce every freakin’ thing they did online. When they chased and chattered, it usually led to trouble.

Valentine’s Day. The day for looove. For Cupid’s arrow to strike. For flowers, candy, and romance. For diamond rings in velvet boxes.

To Carissa, Valentine’s Day was akin to pouring acid in an open wound. She’d just as soon put her own eye out than subject herself to anything red or pink or sickeningly sweet. The memory of Jared’s hands all over one of her ex-friends took care of that.

Carissa breathed deeply, pressing the ugly away. The peak was in view, and she was armed with a bottle of wine.

A few more steps up the steep, craggy trail and Carissa reached Diablo Peak—chosen for its name, of course—and threw her arms wide. The sky was crystal clear with puffy white clouds. Carissa sighed with contentment as she looked out over the valley. “Perfection.”

As her gaze panned the area, she noticed a figure poised on the opposite edge of the peak.

“Wha—nobody’s supposed to be here!” Angered, Carissa marched over the rough terrain. “Hey, you!”

The figure remained statue-like. As Carissa drew closer, she noticed his lack of proper attire. The tall, broad-shouldered man wore a charcoal suit and dress shoes. Inky waves of hair hit just below the collar of his suit jacket.

Carissa had to admit he filled the suit out nicely. He was also insane. For a moment, she forgot her desire to be alone and strode forward until she was a few feet from the lunatic. “Aren’t you cold? Where’s your coat? And how about some hiking boots, Einstein?”

Just as Carissa was starting to wonder if he was a statue, the man came to life. He turned his head her way, a wry grin sliding across his full lips. His face was angular with a jaw that might easily cut glass, and behind a pair of designer frames blazed the bluest eyes she’d ever seen.

“No coat, boots, or Einstein.” He looked off into the distance again, hands in his pockets.

Carissa felt dismissed—though his tone wasn’t unkind. “I came up here to be alone.” Acid dripped from her words.

“You don’t understand. I climbed up here to get away from the male population and get drunk.”

“Ah.” He nodded as if it all made sense.

Carissa gritted her teeth. “Why are you here?”

“You want to get away from the male population and get drunk?” A half-smile played about Carissa’s lips.

“How did you even get up—” Carissa’s foot slipped, sending her sliding off the edge of Diablo Peak into freefall. She shrieked, squeezing her eyes closed.

Carissa’s plunge abruptly slowed, and she cracked an eyelid open. The man held her suspended in the air. “This is a dream.”

“You wouldn’t believe me if I told you.” He guided them back to the mountain. “You’re safe now.”

Carissa placed her hands on his muscled chest for stability and opened both eyes. Beneath his white button-down, a swirl of red, yellow, and blue showed through.

She opened her mouth to thank him, but what came out was, “You’re—you. Why would you hate Valentine’s Day?”

“My existence is a solitary one.” His blue eyes lasered into hers with meaning. “You have a choice.”