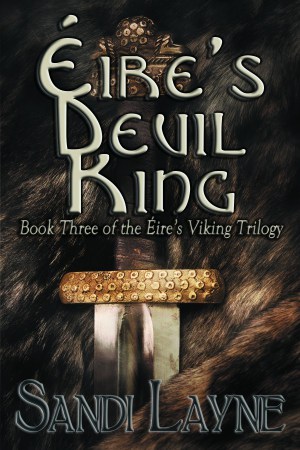 Éire’s Devil King is the last installment of the Éire’s Viking trilogy, a set of well-researched volumes all about . . . vikings! If you haven’t read the first two books in this fantastic series, you need to. I’m sad to see this come to an end, but I will console myself with Vikings on the History Channel.

A man of ability and ambition, Tuirgeis Erlingrson has nurtured the desire to carve a place of leadership for himself on the Green Island, Éire, that he has raided multiple times. After the death of his wife in Nordweg, he takes his surviving son to Éire. Having connections with his adopted brother, Cowan, and Agnarr, his former countryman, Tuirgeis feels he has the support he needs to make his claims strong.

Agnarr is torn. His promise to Aislinn to remain with her on Éire is still in force, and he resists Tuirgeis’s requests to join the conquering forces from Nordweg. He desires above all things to maintain a safe home for his wife and children in Dal Fíatach. Charis encourages Cowan to do the same, though this makes for tense moments between them.

After initial disastrous attempts to achieve his ambition, Tuirgeis comes to learn that there is more to claiming a kingship than merely overpowering the locals. Tuirgeis finds himself at odds with the very people he had hoped would reinforce him. In addition, he wants to establish his father-line. He has one son; he wants another to be born of Éire. Will the woman of his choice accept and support him?

At length, Agnarr and Aislinn—though she is heavy with child—sail with Cowan and Charis to join Tuirgeis as he battles over one final summer to attain the High Kingship of the island.

Tuirgeis knows he doesn’t have long to make his claims; the Danes are coming in greater numbers than before. As he wins men of Éire to his cause, he has to maintain the relationships he has already fostered with Agnarr and Cowan. Charis finds that her Otherworldly gifts are needed by a man she considers her enemy.

Sandi Layne has the ability to paint vivid imagery with words. I tend to forget I’m reading at all because her descriptions yank me back in time to the beauty of the Green Island, the smell of roasting meat over the fire, and into battle with the vikings. It’s obvious a great deal of research and care went into this trilogy in order to keep it historically authentic in addition to being a riveting read.

All my favorite characters who made the first two books so compelling were very much a part of this final volume. It was wonderful to watch the growth of the characters and their relationships over a period of years. I am and forever will remain Team Agnarr. Just had to say that.

My one critique is the story jumping around too much, which drew me out of the narrative to question what was happening. At times, I found it confusing to follow and feel the impact of certain dramatic events was glossed over by moving ahead in time and then mentioning the outcome as a past afterthought. Perhaps this was a way to keep the book from becoming too lengthy, but it didn’t do the tale justice in my opinion.

The battle scenes were well-crafted, palpitation causing, and unapologetically descriptive. We finally get to see a bit of Charis’ magic, hinted upon previously, but she won’t give up all her secrets. I loved the epilogue and thought it was a fitting end to the trilogy.

The first two books received a hearty five stars from me. Regrettably, I have to knock a star off this one because of the disjointed movements in time that pulled me from the story as mentioned above. That said, I very much enjoyed this fitting conclusion to the series and highly recommend the Éire’s Viking trilogy. A must read!

Read my review of Éire’s Viking