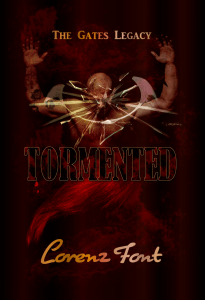 Tormented (The Gates Legacy #2) starts off with a bang—the bang of a wrecking ball. After Tack Enterprises was infiltrated by the evil Demetrius and beloved CEO, Pritchard Tack, was murdered, those left behind recognized the need to move headquarters. Still mourning their fallen leader, those who remain must continue his work, continue to fight.

Book one focused on the budding relationship between Harrow and Jordan. Book two puts the spotlight on Allison (the late Pritchard’s daughter) and Tor (her bodyguard). Tor has some painful secrets that hold him back from getting involved with Allison even though he feels the pull as much as she does.

What I really like is that Harrow and Jordan aren’t shelved in this volume. They are an integral part of the story, as is the inevitable, blooming romance between Rohnert and Shelly—and I suspect book three will focus on those two.

Lorenz Font created a wonderfully rich set of characters that jump off the page. They’re very real and very “human,” sometimes allowing their emotions to cloud their judgment. Goran is pure evil, and I can’t wait for someone to dish it back to him. I found myself sympathizing (a little) with Melissa, the head mistress of Goran’s harem. It’s to the author’s credit that she created characters with depth and layers, so readers can find something to identify with in all of them—even Zane.

The writing is descriptive enough, without being overly wordy or flowers, that I easily pictured what was happening. Ms. Font can really write a fight scene—volatile, exciting, brutal—and she’s not afraid to injure, maim . . . or kill major players. Everything isn’t hearts and flowers. Things get real, plans go awry.

One small critique I have regards the two new couples. When Tor finally gives into his feelings for Allison, he is rather cavemanish about the decision—a “you wanted me, so now you’re going to have me” kind of thing. The same type of scenario happens between Rohnert and Shelly. (Let’s not talk about Rohnert—after what he did with Shelly, he needed a good slap.) This is personal preference when reading fiction, but I believe a woman’s full consent is always required, even between established or married couples. Both women were willing, but there wasn’t much wiggle room allowed for if they weren’t.

Many trilogies suffer from “sagging middle syndrome.” That is not the case here. In fact, I would go so far as to say book two is a good deal stronger than book one. It’s grittier, has more action, and no fade-to-black scenes. The writing is tighter and more polished. I did come across some minor typos in my copy—which was an ARC—but it was well edited overall.

This is well worth the read, and I’m looking forward to book three!